I had a great time at the fair the other day, and all the food lived up to expectations.  I met the girls from school at 5 in front of the school (or, at least, I was there at five-- Belgians do not seem to be as prompt as I am) and we walked over together.  Some parts of the fair were about what I expected:  rides for people of all ages and levels of fearlessness, games involving shooting/throwing things to pop/knock over a target in exchange for a prize, and lots of food.  You could buy french fries and churros and croustillons, which are what the offspring of a doughboy would be: balls of dough somewhere between the size of a golf ball and a tennis ball, deep fried and covered in powdered sugar.  There were also sausages of all types, burger-esque sandwiches, and lots of candy: "Pommes d'amour" (i.e. candy apples), chocolate covered fruits, gummies, and even pralines and boxes of chocolates.  What surprised me, though, was that, unlike my beloved Bangor State Fair (which I admit, is not so beloved-- I have only been twice) back at home, it was not sketchy at all.  All the food stands were surprisingly classy, and some were manned by chocolatiers in white lab coats and gloves selling the same sort of confections you would find in the stores.  Some tents sold escargots and calamari (which maybe aren't so fancy but I always assume they are, because in the States it's the classier restaurants who serve them), and I even saw people buying wine in real glasses.

We went on a few rides, but not too many, as they were relatively expensive (anywhere from 3-6 € each, which hurts more when you have to convert from the dollar), bought some fried food, and walked around the fair.  It was a bit cold and started to drizzle, but it was still fun, and the weather just meant that the hot food tasted that much better. 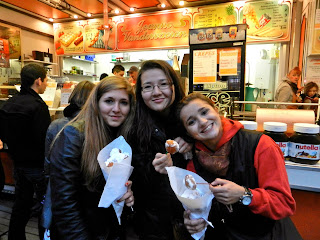 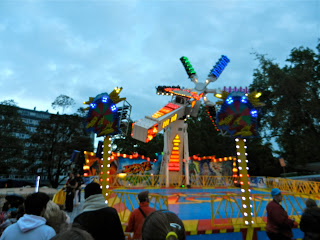 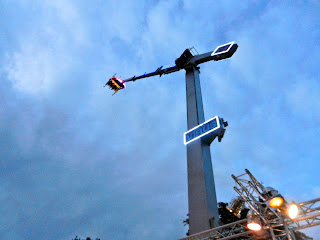 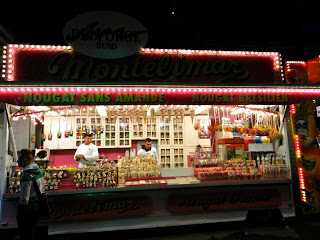 Notice the lab coats.
Posted by Audrey at 8:26 AM

Audrey
Maine, United States
Hey, I'm Audrey! I am a high school student from Maine who will be spending my senior year abroad in French-speaking Belgium and sharing my experiences via this blog!